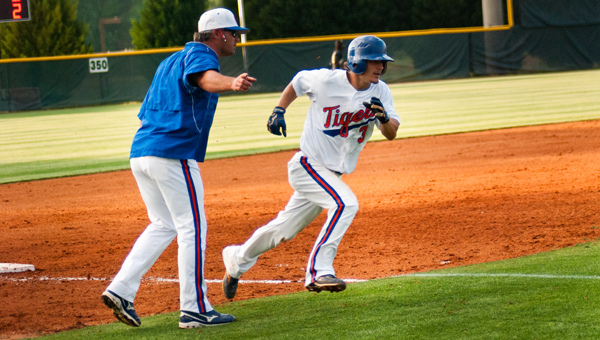 Chilton County baseball coach Josey Shannon, left, waves senior Kipp Moore around third base and toward home plate for one of the Tigers' 11 runs during a win Friday over Greenville. The game was the first in a three-game series to begin the Class 5A state playoffs.

Chilton County’s baseball team carried its hot play right over into the postseason.

The Tigers on Friday won a best-of-three series against Greenville, 11-1 and 7-0.

Including Friday’s wins, CCHS has won eight consecutive games, is 31-5 on the season and is ranked No. 8 in the state’s 5A classification.

The Tigers will host Brookwood beginning on April 27 for Round 2 of the playoffs. CCHS won all three regular season games against Brookwood.

The CCHS offense, meanwhile, struck early and was relentless. With Blake Teel on base, Craig Headley blasted a pitch over the fence.

Headley was called out, however, for failing to touch second base on his way around the bases. Teel’s run counted.

The Tigers added four runs in the bottom of the third inning, and six runs in the fourth.

In the fourth inning, a streak of four consecutive doubles–by Headley, Trevor Thomas, Trenton Bishop and J.D. Minor–was broken up only by a hit batsman.

Teel retired the side in order in the top of the fifth to end the game early via mercy rule.

Thomas and Cameron Cummings combined to shut out Greenville in Game 2.

Headley homered and finished with seven hits in seven at-bats during the series.