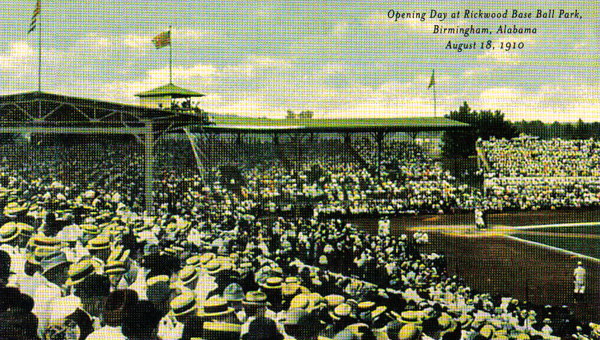 Way back when: This postcard shows Rickwood Field on Opening Day of the 1910 season.

Two local high school teams this week are playing at a couple of the premier ballparks in the country—at any level of play.

Thorsby’s and Jemison’s baseball teams are competing this week in the Jason Armstrong Fellowship of Christian Athletes tournament, with some games held at Riverwalk Stadium in Montgomery.

Riverwalk Stadium is home to the Double-A Montgomery Biscuits.

On Saturday, Thorsby will visit historic Rickwood Field at 9 a.m. to take on Corner.

Randy Ferguson, a member of the Friends of Rickwood group, said he and Thorsby coach Ab Argent worked for several years to schedule a game for the Rebels at Rickwood, which is the oldest standing professional baseball park in the United States.

Rickwood was built for the Birmingham Barons in 1910 and served as the home park for the Barons and the Birmingham Black Barons of the Negro Leagues. Friends of Rickwood is working to turn the park into a “working museum,” a tribute to the sport’s history that would still host competitions.

Birmingham City Schools play their home games at Rickwood, which is owned by the city, but Ferguson said dates to visit the park are a commodity.

“These kids will be able to go one day and tell their kids that they played on that field,” said Ferguson, whose son Taylor played for Argent in 2005, the coach’s first year at Thorsby. “What we want to do is build connections to the park. These kids will one day want to come work at this field like I have.”

In the FCA tournament, Jemison defeated Trinity Presbyterian, 5-3, on Tuesday, while Thorsby lost to Alabama Christian, 5-2. Those games were played at Patterson Field, the home of the Alabama State University baseball team.

For Jemison, Brent Childress earned the win on the mound, and Shane Howard earned the save.

Jacob Bates hit a run-scoring double to take the lead in the top of the sixth inning.

Thorsby plays Trinity at Riverwalk at 3 p.m. Thursday, and Jemison will follow at 5 p.m. with a game against St. James.

JHS coach Jason Easterling said he’s happy his players have the opportunity to play at venues like Patterson Field and Riverwalk Stadium.

“Unless you’re in the state final, you don’t get to play there that often,” he said.