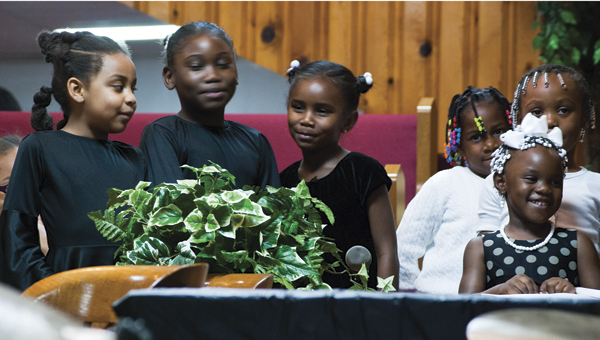 The program, titled “How We Got Over” recognized accomplishments in fields like education, politics, athletics, business and more.

“We have history right here in Chilton County that needs to be talked about,” said Francine Lewis in introducing the skit.

After highlighting some of the inventions African-Americans have made that impacted everything from clothing to home heating and cooling, the program honored local milestones in black history.

Some of this history included:

•James Hill was the first black to serve on the Chilton County Board of Education in 1969.

•Eddie Reed was elected as Jemison’s first minority council member in 1976. He was later elected as the first black mayor in Chilton County in 2004. He was reelected in 2008.

•John T. Sims was elected as Clanton’s first black city council member in 1988. Elem Hill and Greg DeJarnett have since followed him. Hill’s wife, Elizabeth, finished out his last term after his death.

•William Trimble Sr. was the first black postman in Clanton.

•Velma Tinsley was the first black court clerk/magistrate for the city of Clanton.

•John T. Sims Jr. and Larry Mahaffey were the first blacks to play football and basketball at Chilton County High School before integration.

•Wendy Hill was the first black cheerleader in the county in 1975 at CCHS.

•Herman Washington was the first black president of the Chilton County Chamber of Commerce.

•Jessica Swindle was named the first black Peach Queen in 2011.

Mayor Billy Joe Driver said the program brought back a lot of memories for him.

“It goes back a long time. I’ve enjoyed this night, and it really has brought back great memories,” Driver said.

Pastor Melvin Hunter said he hopes the program can become an annual tradition and possibly be hosted at different churches across the county.