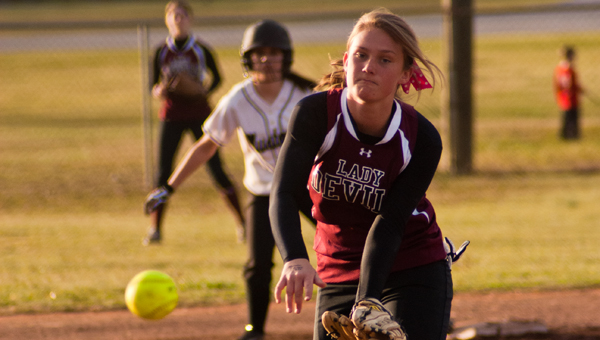 Maplesville softball player Autumn Smith delivers a pitch during a game Tuesday against Isabella. MHS won, 12-7, to improve its record to 3-1 on the season.

Maplesville topped Isabella, 12-7, in a softball game between two young teams trying to gain confidence for later in the season.

The Red Devils and Mustangs each have only two seniors on the roster—and only five players total in grades 10-12. 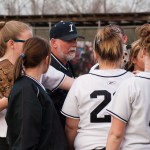 Get together: Isabella coach Mike Ratliff talks to his team during Tuesday’s game.

The rest are freshmen and younger, and Isabella’s youth showed early Tuesday, as mistakes allowed MHS to score six runs in the bottom of the first inning.

“We’ve got to learn to play with a little more consistency,” Isabella coach Mike Ratliff said.

IHS (3-1) cut the deficit to 6-5 in the top of the second inning, but then Maplesville pitcher Autumn Smith settled in, holding the Mustangs scoreless over the next three innings as her team built a 12-5 lead.

Part of the damage was done on a run-scoring triple by Morgan Little in the bottom of the fourth. Little then scored on a wild pitch. An RBI double by Kiana Andrews in the fifth helped also.

Smith had three hits in the game and scored three runs.

“I’m hoping we get some confidence as we go along,” he said of his team, which is now 3-1.