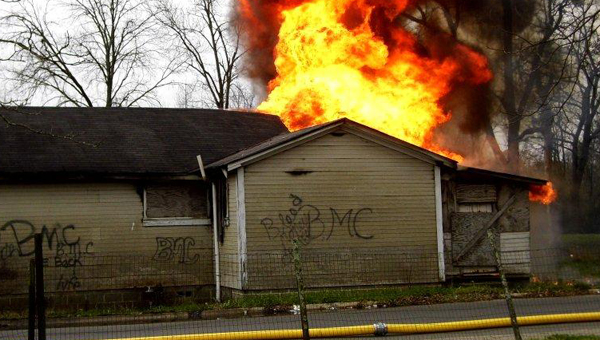 This abandoned home in West End was burned last week.

At least three abandoned houses were condemned and burned last month in Clanton.

Some of the houses, which are beyond repair, were being used to sell drugs or were overrun with rodents and snakes, said DeJarnett, who represents the district where the houses were located.

The abandoned homes are particularly dangerous in West End, one of the older communities in Clanton, where many homes are built close together and on smaller lots than those used today, DeJarnett said.

“It’s a small-knit community,” he said.

Once the houses are burned, the property lots are then cleared.

“I am thankful that the city leaders are working to clean up these lots,” Stilwell said. “They have been a hazard to the police — people use them to store, consume, sell drugs and they have become bulletin boards for gang signs. I am glad they are coming down.”

Before the lots are burned, property owners must sign a release. Most of the people who own the abandoned houses and land today don’t live locally, DeJarnett said.

DeJarnett encouraged more owners with abandoned houses on their property to agree to have the buildings destroyed.

For more information about the condemnation process, contact Clanton City Hall at 755-1105.