Tigers knocked out of playoffs 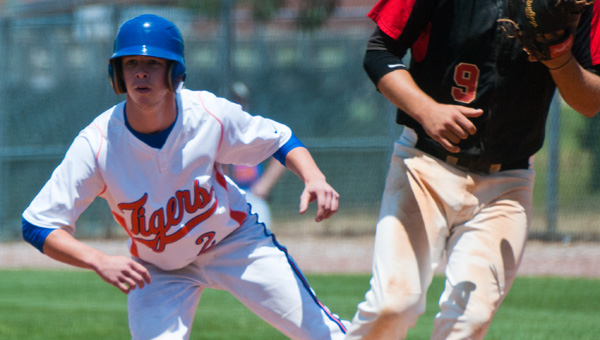 Chilton County's Trevor Thomas gets a lead off first base. Thomas hit a home run in the fifth inning of Saturday's loss to Spanish Fort.

Chilton County was eliminated from the Class 5A state baseball playoffs with a 16-5 loss to Spanish Fort on Saturday.

The Tigers had momentum after a come-from-behind victory Friday in Game 2 of the best-of-three series, but the visiting Toros established early on that they were the better team.

SFHS scored three runs in the first inning, three more in the second and one in the third before Chilton got on the scoreboard.

J.D. Minor led off with a single, and Cameron Cummings singled before two consecutive groundouts. Minor scored from third base on a balk, and Cummings scored on one of the groundouts, by Craig Headley.

Spanish Fort responded with one run in the fourth and three in the fifth on a home run by Rocky McCord.

CCHS cut the lead to 11-6 with four runs in the bottom of the fifth—highlighted by a three-run home run off the bat of Trevor Thomas—but that’s as close as the Tigers would get.

For more on the game, check clantonadvertiser.com Monday and see Tuesday’s newspaper.