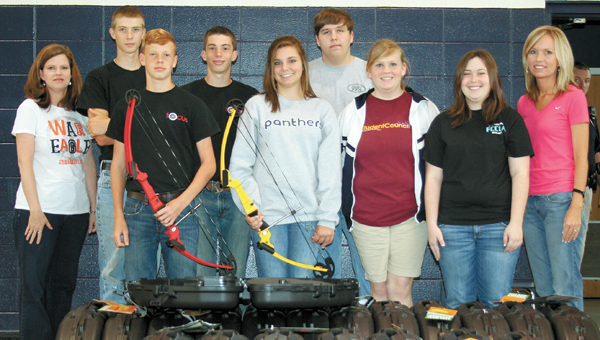 Generous donation: Members of the Jemison High School archery team were given 20 bow cases by the Chilton County Bowhunters Association.

In only its first year of existence, the Jemison High School archery team will compete on the National Archery in the Schools Program’s biggest stage.

The JHS archers—ranked in the top 5 in the state—qualified in the high school division for NASP Nationals on May 13-14 in Louisville, Ky., by posting their best score of the season at a state competition.

“We’ve been very pleased with the success we’ve had, especially considering it is our first year,” said Nanette Easterling, who coaches the team along with Robin Gray. “It just shows that it’s a sport you can succeed at if you work hard at it.”

The squad has made it this far thanks to daily practices and relentless fundraising efforts.

Easterling and Gray both have children on the Clanton Middle School archery team, which made it to Nationals last year.

Some of the shooters—males and females who range from freshmen to seniors—had hunted with bows before shooting competitively, but most had never even picked up a bow, making their accomplishments even more remarkable.

The squad needed to shoot a 2,900 (totaled by taking the top scores from eight male and four female team members) at the state competition on April 21 at the Birmingham-Jefferson Civic Center. They shot a 3,127, more than 200 points better than their previous best effort.

The improvement can be attributed to the shooters’ practices with Gray, who shoots with them and offers technical advice.

But the best shooters in the world wouldn’t be able to win competitions without equipment and the means to travel.

“We’ve had to raise a lot of money to get started,” Easterling said. “It’s an expensive sport.”

Other people and organizations made generous contributions, including the Jemison City Council, the Jemison High School Quarterback Club and Tracy Smith.

Each shooter was asked to find a sponsor, who contributed $50, and a faculty vs. seniors exhibition basketball game at the school netted more than $1,000.

A “Jemison Idol” performance competition has been scheduled for May 4 at the school auditorium, and the proceeds will help pay for the trip to Louisville, which Easterling said would cost about $6,000.

“They’re really excited,” she said about the team. “We appreciate all the support we’ve gotten from the community, and our administration here has been really supportive.”