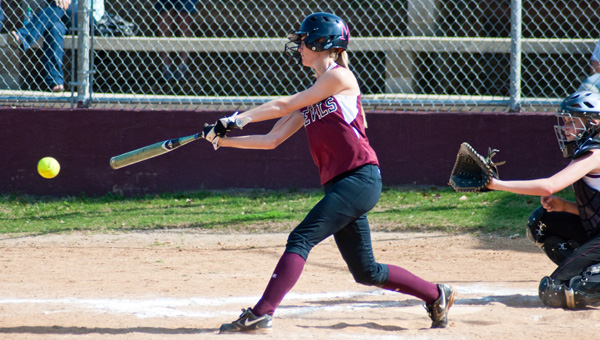 Off the bat: Maplesville’s Morgan Little swings for a hit during Monday’s game at Thorsby. Little had two hits in four at-bats and scored three runs in an MHS win.

Maplesville ended its regular season Monday on a positive note, winning at Thorsby, 9-1.

The Red Devils now have a week to rest up for their area tournament, which MHS will host on May 3.

Maplesville scored two runs in the top of the first inning on Monday, and it turned out that the output would have been enough for starting pitcher Courtney Killingsworth.

Morgan Little led off the game by reaching base on an error and advanced on an Autumn Smith single.

Courtney Baugh got one run home with a groundout, and Kiana Andrews came through with a two-out single to score Smith.

Baugh went 2-for-3 in the game with three RBI.

Thorsby got its only run in the bottom half of the inning.

Taylor McManus doubled and advanced on two consecutive groundouts, scoring on one by Christian Niece.

Little got things going again in the third inning by leading off with a single and scoring on an error. Little finished the game 2-for-4 with three runs scored.

Smith also scored in the third, on a Baugh single.

The Devils (20-13) put the game away in the fifth inning. In three consecutive plate appearances with one out, Natalie Arnold ripped a two-run double, Alisha Blackmon laced an RBI single and Jordyn Graf lifted a sacrifice fly to center field to score another run and make it 8-1.

Little led off the sixth with a single and scored the game’s final run.

Killingsworth pitched all seven innings, allowing the one run on seven hits and two walks while striking out four.

McManus suffered the loss but went 2-for-3 at the plate with a walk.

Rebels hit 7 homers, advance to Round 2

Pat on the back: Stephen Mims is congratulated by teammates after hitting a home run during Friday’s baseball playoff game... read more