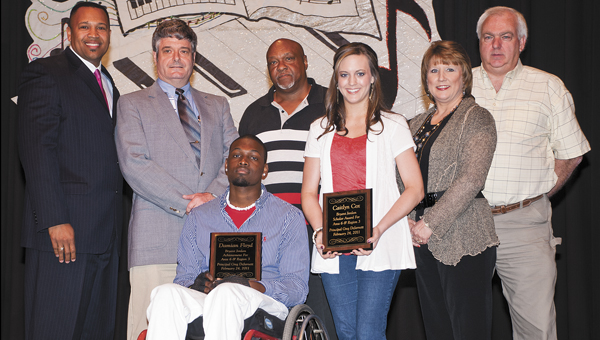 Two Chilton County High School students are being honored for excellence on the athletic field and in the classroom.

“I was shocked,” said Cox. “I was very honored to be chosen out of everyone in the area and region.”

Cox was awarded the Scholar-Athlete Award, given to students that excel in academics as well as athletics. She was the Tigers’ varsity cheer captain, as well as the CCHS valedictorian and carried a 4.0 GPA her senior year. She held many honors and positions in school clubs and student government, and was the president of the Juniorettes Club of Clanton.

Floyd won the Student-Athlete Achievement Award, given to the student-athlete who achieves beyond his or her ability both academically and athletically or who has overcome obstacles or hardships to achieve success.

Floyd was an up-and-coming basketball player for the Tigers until his career was tragically cut short by a car accident that left him paralyzed from the waist down. Despite the setback, he still attended every practice and game and was a leader in his school as well as his church.

“I’m extremely proud of Caitlyn and Damian for their resiliency to hang in there and do their best,” said CCHS Principal Greg DeJarnett.

Each student was submitted to represent CCHS on the area level. The students’ applications are reviewed and graded by a committee, and then a winner is chosen.

The winner’s application is then submitted to the region committee, where a larger committee meets and repeats the process, all the way up to class and state levels.

By winning the region, DeJarnett said the two did something no other Chilton County High athletes have ever done, winning both the regional scholar and achievement award in the same year.

“This is a first for CCHS,” he said. “Caitlyn and Damian made school history by being the first Bryant-Jordan Scholarship regional winners [ever].”

Winners of the regional awards are awarded scholarship money and are recognized at the statewide banquet held in Birmingham on April 11.

After graduation, Cox plans to attend Auburn University nursing school, where her field of study will be anesthesiology; and Floyd plans to attend Jefferson State Community College, and his major is undecided.

Sue Gilliland, a Verbena schoolteacher and parent, will hold a public meeting Thursday, April 7 at 7 p.m. in the... read more