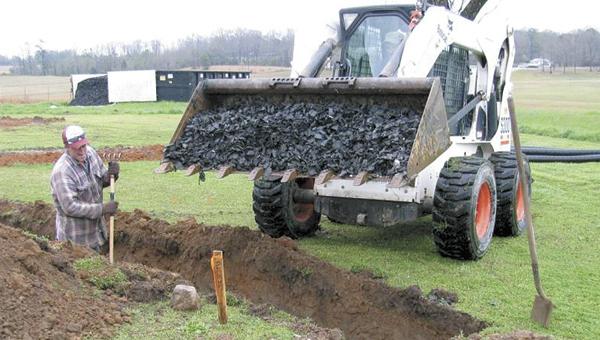 A septic tank project near Collins Chapel this week broke new ground by being the first in the state to use an alternative material in the installation of the system.

A septic system project near the Collins Chapel community this week was the first of its kind in the state—but something more county residents could benefit from in the future.

Material produced from scrap tires, instead of sand or gravel, was used in the installation of a septic tank drain field.

The project was eligible for a $2,500 reimbursement under a state Department of Environmental Management initiative to encourage homeowners to use tire-derived aggregate in septic system installations.

Alabama residents produce more than 5 million scrap tires each year, according to an ADEM press release, and another four million are imported into Alabama annually for disposal.

The tires are cut into small pieces known as tire-derived aggregate, which can be used as part of the septic tank infiltration system.

In order to participate in the reimbursement program, the septic system must be installed at a residence, and TDA must be utilized as the drainage media. The design and installation of the septic system must meet, or exceed, the requirements that have been established by the Alabama Department of Public Health.

In addition, the septic system must be installed by an installer that is licensed through the Alabama Onsite Wastewater Board.

The reimbursement also requires pre-approval from ADEM through the submittal of an application, which can be found on the ADEM website at www.adem.alabama.gov or by calling the Scrap Tire Marketing Program at (334) 271-7700.

Preference will be given to installations that utilize TDA from scrap tires that are generated in Alabama.

Thorsby’s Wesley Smitherman, left, tries to apply a tag after a throw from catcher Matt Morgan after a Montevallo baserunner... read more