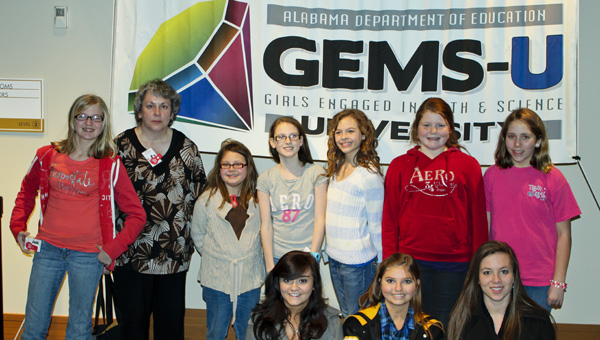 Isabella's GEMS sponsor Donna Mayfield with the high school and elementary GEMS teams at the McWayne Center in Birmingham.

Isabella’s Science Olympiad and elementary and high school Girls Engaged in Math & Science (GEMS) teams had a great weekend as they set out to represent their school.

Kayla Kotke and Amber Mandrell received medals after placing third in the Ecology event of the competition.

The students have learned what to do and how to better prepare for next year’s competition.

“We’ve learned that other students from other schools don’t prepare in school only, like, this is there hobby as well,” said Kotke. “I think we will do much better next year. We would win.”

Having the needed supplies and knowing what to expect will be better for the team, Brendon Fletcher.

“We’ve just got to be prepared, have the right information and assert what we’ve learned so far,” Fletcher said.

The Isabella GEMS spent their weekend in Birmingham at the McWayne Center presenting and conducting experiments.

Heather Posey was chosen to address the conference because Isabella has participated in the event for numerous years. The title of Posey’s speech was “Taking The GEMS To The Next Level.”

The “Little GEMS” were taught the lab by a physics professor from the University of Montevallo.

“In presenting the project to other teachers and professors who were in the areas of Math and Science, the showed leadership, knowledge, better understanding of science concept and learned how to use several instruments,” said Donna Mayfield, elementary GEMS sponsor. “They also learned how to compromise and learned how to work together.”

During the event, Mayfield spoke with other GEMS sponsors and they are looking to begin a GEMS club where they would meet once or twice a month beginning next month.

The GEMS are already formulating new ideas for next year.