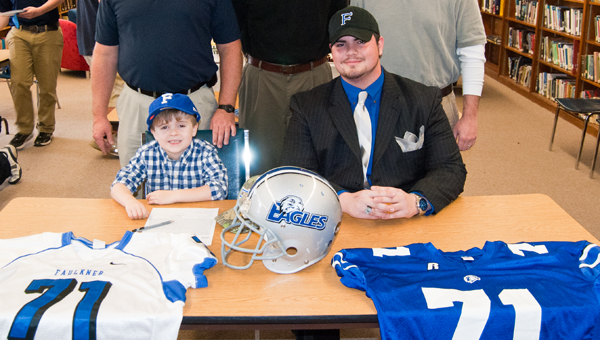 Sign here: Jemison senior Hunter Cowart (seated, left) signed on Wednesday to play college football at Faulkner University at an event attended by JHS coaches (standing, from left) Daryl Lowery, Brad Abbott and Kelly Smitherman. Also at the signing was Caden Gray, son of one of Cowart’s teachers. Cowart missed Gray’s birthday party recently because of an official visit to Faulkner, but the player made it up to his friend by asking him to be part of the ceremony.

Hunter Cowart once wondered whether it was worth the work it would take to continue his football career.

Cowart’s decision paid off Wednesday as he signed to play college football at Faulkner University.

The Jemison senior was the county’s only participant in National Signing Day, the first day high school athletes across the country can make their college choices official.

Some of the most high profile athletes announced their intentions in front of packed gymnasiums—and television audiences.

Cowart’s event in the Jemison library was more subdued—and his decision was made obvious by the Faulkner University paraphernalia surrounding the papers he was to sign—but the opportunity for Cowart to further his career was significant because it wasn’t always a given.

As a junior, Cowart played much of the season through a shoulder injury. He also required knee surgery after the year, and he was unsure he wanted to commit to the long road to recovery.

“I really debated whether to keep playing, whether it would be worth it,” Cowart told a group of about 30 friends, relatives and coaches.

Cowart said he prayed for a sign, and woke up one day to find he was included on the All-State team compiled by the Alabama Sports Writers Association.

He figured maybe he was good enough at football to pursue a career.

After talking with coaches from several schools, Cowart said he decided Faulkner was the right fit because of its proximity to home.

Cowart played center and guard during his time on the Jemison offensive line, and Faulkner assistant coach Duane McWhorter said Cowart will get a look at the same two positions at the next level.

“His coaches raved about his character, his work ethic, the way he handles his stuff in the classroom,” McWhorter said. “Once we found out how good of a football player he was, it was a no-brainer.”

Cowart was the only county player to sign Wednesday, but many others are in discussions with colleges and could have the opportunity to sign at a later date. Those players include: Chilton County’s Jacob McKinney and Blake Norman; Isabella’s Austin Haigler; Maplesville’s Casey Atchison, Matt Hamner, Hunter McCay, Edwin Pettiway and Dylan Wallace; Thorsby’s Eric Camarillo and Andrew Farris; and Verbena’s Garrett Dennis.

Arm’s length: Chilton County’s Shuntar Washington tries to save the basketball from going out of bounds during Tuesday’s game while... read more