The bride was escorted by her father and wore an ivory silk shantung and lace gown by designer Lea Ann Belter. The Alencon lace bodice had a scooped neckline and dropped waist accented by a soft charmeuse cummerbund at the waist. Tiny covered buttons trimmed the center back of the bodice. The full A-line silk skirt swept to a chapel length train. Completing her ensemble was a custom-made fingertip length veil of illusion edged with Alencon lace. The bride carried an heirloom handkerchief around her bouquet that also had been carried by her mother. 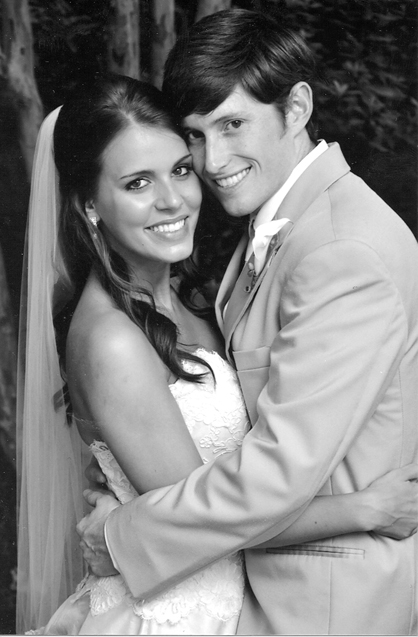 The maid of honor was the bride’s cousin, Tessa Puckett of Trussville. The bridesmaids were Brianna Snider of Vestavia Hills, Kelly Harrington of Hoover, Michelle McCaul of Huntsville, Marissa Ray of Hayden, Sydnee Winston of Spanish Fort, Courtney Snow of Vestavia Hills, Jessica Edwards of Clanton and Mallory Ray of Hayden. The junior bridesmaid was the bride’s cousin, Abbey Moss of Homewood. Flower girls were Marybeth and Makiley Porter.

The reception was held at Inverness Country Club in Birmingham. The groom’s parents also hosted a rehearsal dinner at the same location.

After a trip to Saint Lucia, the couple lives in Birmingham.