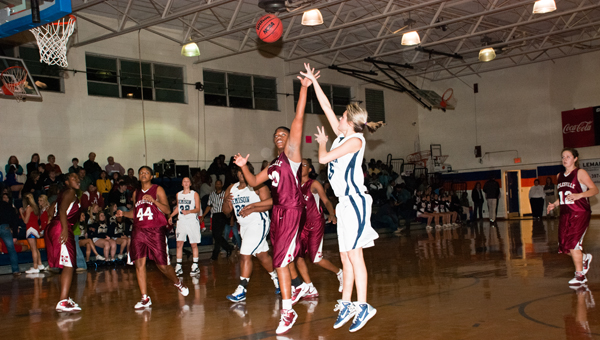 Shoot for two: Jemison’s Shayna Robinson, right, shoots over Maplesville’s Kiana Andrews on Tuesday in a game that began the varsity action in the Chilton County Basketball Tournament.

The first day of the Chilton County Basketball Tournament was a good one for Jemison.

The Panthers girls will face Thorsby at 6:30 p.m. Friday, while the boys will face eight-time defending tournament champion Chilton County High School at 8 p.m. on the same day.

The tournament will feature on Wednesday two games that were scheduled for Monday. When school was canceled because of severe weather, the games were postponed.

Verbena’s and Chilton County’s girls will play at 3:30 p.m. Wednesday, followed by Isabella’s and Maplesville’s boys at 5 p.m.

The tournament is being hosted by Maplesville, but games are being played at CCHS.

On Tuesday, Jemison’s boys put their game away early, on back-to-back 3-pointers by Zak Kaylor and Javae Swindle less than 2 minutes into the second period that made the score 27-10.

Kaylor had a team-high 14 points, and Trey Bryant added 13 points.

In the girls game, Maplesville was competitive but never really threatened after Kelsey Mims sunk a floater at the first-period buzzer to give Jemison a 13-6 lead.

The Panthers led 23-11 at halftime and 32-19 after three periods, but MHS cut the deficit to eight points, at 33-25, before Mims nailed a 3-pointer with about 6 minutes left to play to end any doubt about the outcome.