John and Nick Andrews are familiar with football success from their years at Maplesville, contributing to 38 wins in a four-year period and performing in pressure-packed playoff games.

So, the brothers should feel right at home in Saturday’s Southwestern Athletic Conference Championship Game against Texas Southern at Birmingham’s Legion Field. 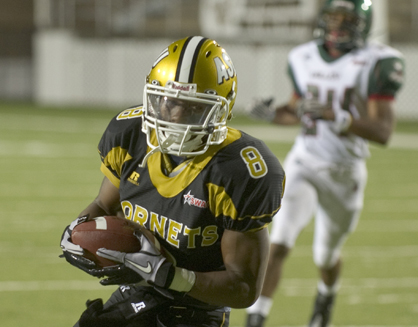 But the reasons for the Andrews brothers’ achievements go beyond talent and winning.

For now, anyway, Alabama State and its upcoming championship game is the focus.

This time around, John Andrews said, the Hornets (7-4) will try to take advantage of their speed, which includes preseason All-SWAC selection Nick Andrews at receiver.

Nick Andrews, a junior, leads the team with 47 catches and 615 receiving yards, but his numbers are down from last season.

“Teams will bracket me, put two guys on me,” Andrews said of the attention he’s received since being named all-conference. “It frustrates me. I didn’t get the yards I got last year, but that doesn’t matter as long as we’re winning—and we’re in the championship game.”

John Andrews, a junior because he took a redshirt his first season at ASU, hasn’t seen the playing time his brother has because he arrived as a quarterback, the position he played at Maplesville, but was moved to defensive back and then receiver, a position he’s still trying to learn.

In Nick, John has a source of knowledge always close at hand.

“Anytime I need help on anything, I go to him. Even though he is the younger brother, that doesn’t matter to me,” John Andrews said. “It was a transition, but I had no complaints. I just want to do what’s best for the team.”

John Andrews said he wants to continue to learn the receiver position and how to be a leader for his teammates, and he expects the brothers’ senior seasons to end much like this season.

“We’re in a championship game now, there’s no reason we shouldn’t be in one next year,” John Andrews said.

Nick Andrews didn’t choose to attend Alabama State just because John was there, but the time Nick spent around the program while still in high school, building relationships and finding a comfort zone, certainly didn’t hurt.

The situation has worked out well for the Andrews family, which needs to make only one stop on Saturdays to see both siblings. Father, John Sr.; mother, Juanita; sister, Kiana; and grandmother, Jessie; are regulars at Hornets games.

The brothers, meanwhile, still spend plenty of time in Maplesville, working out in the summer and even speaking to the Red Devils before a game earlier in the season.

For current Maplesville players, John and Nick Andrews serve as proof the values Hubbert and his staff stress—unselfishness, humility, character—do pay off in life.

“It lets them see that even though it’s a small town, a small school, that the opportunity is there,” Hubbert said.

Work has begun at Billingsley School on a desperately needed new gymnasium. Though the structure wouldn’t be completed until next... read more