Panthers, Red Devils on to Round 2 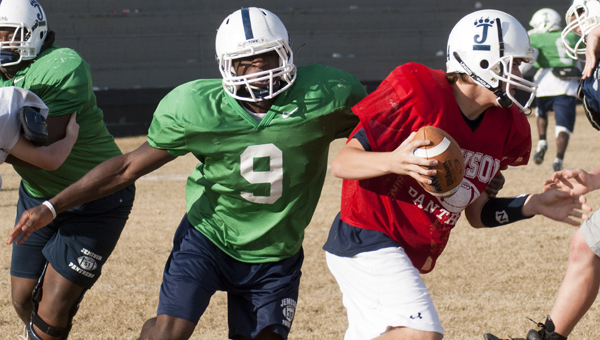 An unbeaten, highly ranked team plays at home against an underdog visitor.

Both local teams that have advanced to the second round of the state football playoffs will find themselves in a similar game on Friday—albeit in opposite situations.

Jemison (7-4) has made it past the first round for the first time since 2000, the year after a run to the state finals at Birmingham’s Legion Field, because the Panthers have found a way to win the games they needed to win, such as a 57-56 decision over Class 4A, Region 4 foe Greene County on Oct. 22 and a 35-27 win over Holtville last week in the first round of the playoffs.

Both of those games went into double overtime, and coach Brad Abbott said the outcomes are a result of his team’s keeping an upbeat attitude until the end.

“Especially at halftime, you can tell what they’re thinking,” Abbott said. “Some teams will come into the locker room dragging. This group, it’s all positive statements coming out of their mouth.

Abbott singled out seniors Isa Bentley, M.J. McKenzie, Jesse Taylor and Cole Thompson as players that have above and beyond their specific jobs by playing their best at crucial moments and by serving as emotional leaders for their teammates.

Encouragement from Panthers like the four above has allowed younger players to take on increased roles. For example, Bentley shifted from his usual inside linebacker position to the outside against Holtville, who was running wide for long gains.

JHS will need to play its best to have a chance at Dadeville, which has been so good at finding ways to win that there are no losses on the schedule yet.

The Tigers haven’t been dominant, though, with six of their 11 wins coming by no more than two scores.

The same could be said of Class 1A No. 1 Maplesville.

The Red Devils have won their 11 games by an average score of 51-5, with eight of those wins being shutouts.

But Maplesville’s closest game of the season was Oct. 8 against Friday’s opponent, Pickens County (7-4). The score in that one was 39-27, and the two teams will play again at 7 p.m. Friday, the same time as the Jemison-Dadeville game.

“They’re a good football team,” Maplesville coach Brent Hubbert said. “They’re in the second round. They played us well.

“Their quarterback (Jematric Curry) made all-state football and basketball as a junior. They’re good at the skill positions, and they have big offensive linemen.

“The four teams that beat them (Aliceville, Autaugaville and Gordo, in addition to Maplesville) are still in the playoffs, and they had a chance to win two of those, including us.”

Jemison and Maplesville have proven themselves to be the best football teams, in their respective classifications, in the area this season, and they are Chilton County’s last remaining hopes for deep playoff runs. Something to keep in mind about Friday’s games is that Chilton County schools are closed, meaning the football teams will have to alter their normal gameday routine—something coaches detest. If Jemison can keep it close at Dadeville, they have a chance. The Panthers’ multi-faceted offense, opportunistic defense, clutch kicker and overall team confidence make them the kind of squad you don’t want to play in a game that comes down to the fourth quarter. Maplesville is a team you don’t want to play, period, though Pickens County provided their stiffest competition to date. The game is at Maplesville this time, though.

Sorry, there are no polls available at the moment.

Below are pairings for the second round of the Alabama High School Athletic Association football playoffs. Class 1A Linden (10-1)... read more