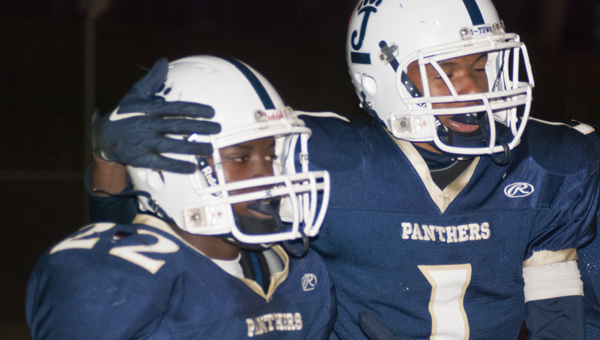 For the second time in the past three games, a Panthers game has gone into double overtime. And again, just like they did two weeks ago against Greene County, Jemison stepped up when it mattered and won the game. This time, 35-27, over a talented Bulldogs bunch.

The game’s last few minutes of regulation proved to be a seesaw of emotions and lead changes.

Jemison scored its first touchdown of the second half with 6:17 seconds to go after a 28-yard touchdown pass from quarterback Scott Clements to receiver Eddie Hubbard. That tightened the score, 21-18, in favor of Holtville.

Running back Javae Swindle then took over and had big runs of 24 and 53 yards. Swindle ran the ball all four plays of the drive, scoring on the fourth one, from 3 yards out.

Holtville responded with an 11-yard run touchdown run by Cutter Holley to tie the game, 27-27.

The Bulldogs missed their PAT attempt, which left the game tied with 1:23 to go in the fourth quarter.

In the first overtime, Dustin McDaniel intercepted the Bulldogs to end their drive. However, the game was prolonged after the Bulldogs blocked the Panthers’ field goal attempt.