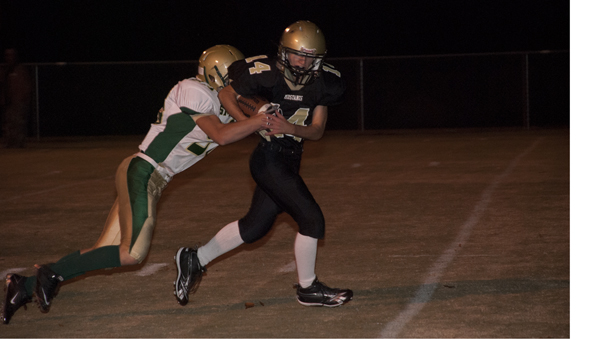 ISABELLA – The Isabella Mustangs trampled over the Shades Mountain Eagles on Friday night, 55-13.
But the most important result of the night was region opponent Francis Marion’s loss to Wilcox-Central, which gives Isabella a spot in the Class 2A state playoffs.
On Friday, Shades Mountain Eagle Justin Simmons flew out of the cage, scoring a 75-yard touchdown the first 14 seconds of the first quarter, the first touchdown of the night.
Mustang Blake Edwards turned around and put Isabella on the scoreboard with 10 minutes and 26 seconds remaining. Blake also scored a second touchdown for the Mustangs, giving them 12 points on the board.
After the third kickoff, an illegal procedure resulting in a 5-yard penalty pushed Shades Mountain back down the field.
After a couple of more touchdowns, including one by Brandon Green at 1 minute and 20 seconds remaining, the Mustangs ended the first quarter with a lead of 28-7.
Brandon Green also scored two more touchdowns for the night, ending the second quarter at 42-7.
The Mustangs began the second half with Aaron Ratliff sacking the Eagles’ quarterback at the 1-yard line.
The Eagles went on to score anyway, but IHS added several more touchdowns.

Verbena closes out season with win