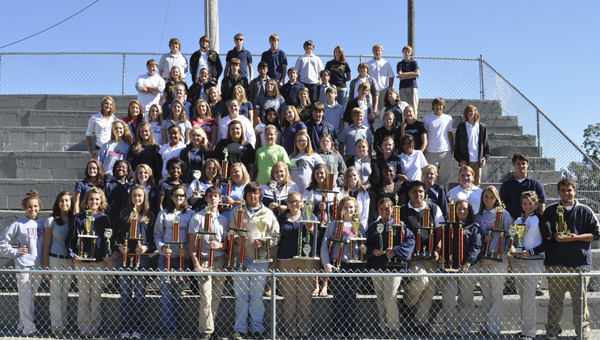 Now, the Jemison Blue Regiment Marching Band has the hardware to prove it.

The band won numerous “superior” and “best in class” ratings at two recent marching contests, the Lake Martin Invitational in Alexander City on Oct. 2 and the Heart of Dixie Marching Festival in Prattville on Oct. 9.

“It’s been a high level show for us, and the kids have really responded to it,” Band Director George Martin said.

The show the Blue Regiment performs is titled, “A Night at the Symphony,” and includes “Toccata” by Johann Sebastian Bach, “Danse Bacchanale,” “Hoedown by Aaron Copland, and Ludwig Van Beethoven’s “Ode to Joy.”

Martin said, though the numbers are classical, they are “themes everyone knows, has heard somewhere. That’s part of the task.”

The show features Anna Davenport playing the violin, and she was awarded the “Best Soloist” distinction at Lake Martin.

Martin said that he even chose to attempt such a difficult show is a testament to his belief in the band members’ abilities.

“We worked a little harder each year so we could pull off something like this,” Martin said. “We hope we can step it up even a little more next year.”