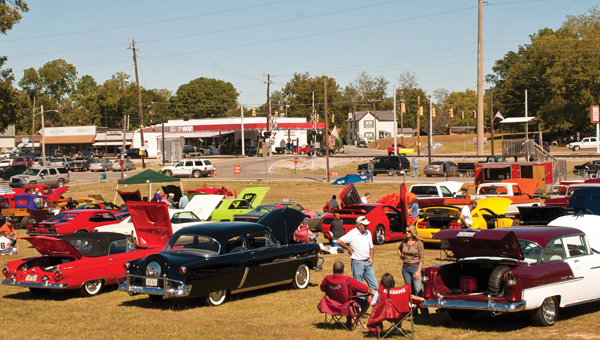 The car show was held on the grass area in front of Thorsby School. Many classic cars were driven in the Swedish Fest Parade Saturday morning.

Everything seemed to fall into place for Saturday’s Thorsby Swedish Fest — the weather was perfect, the entertainment was diverse, and the crowds were larger than ever.

Event coordinator and Swedish Fest Committee Chairwoman Tracia Bussey said the largest turnout recorded for a Swedish Festival was about 4,000 and that Saturday’s crowd easily exceeded that number. In addition, there were more Swedes and descendants of town founders in attendance than ever before.

“It’s about as close to perfect as it can get,” Bussey said, as Vasa Drangar, a Swedish men’s choir from Atlanta, entertained the crowd from the Richard Wood Park pavilion. 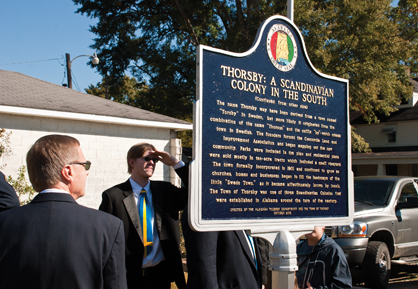 Members of Atlanta-based Swedish men's choir Vasa Drangar look over the new historical marker in Thorsby's town center. The group performed at the dedication ceremony and provided entertainment at the park.

This year’s Fest coincided with the statewide effort known as Alabama’s Year of Small Towns and Downtowns. Before the festivities began in the park, a historical marker was unveiled in front of the Thorsby Fire Department surrounded by a new Scandinavian flag court. During the unveiling ceremony, Vasa Drangar sang each Scandinavian national anthem in its native language, finishing with Sweden’s anthem. Also looking on were many descendants of early town settlers and CEOs of several Scandinavian businesses. The businessmen spent several days in Chilton County looking at potential opportunities for expansion, while the descendants met Friday night in a special reunion at Helen Jenkins Chapel.

While plans are not in concrete yet, Bussey said many of the descendants indicated they might make Thorsby an annual gathering place each year during the Swedish Fest. 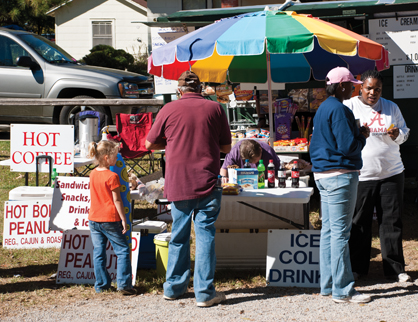 Many colorful booths were set up in Richard Wood Park with arts and crafts, food, games and more.

If one thing made this year’s festival imperfect, Bussey said, it was the lack of Swedish cuisine. Next year she plans to line up a caterer to be able to offer authentic Swedish food.

She thanked all who had a part in organizing the fest.

For more photos from this year’s Thorsby Swedish Festival, see upcoming editions of The Clanton Advertiser.