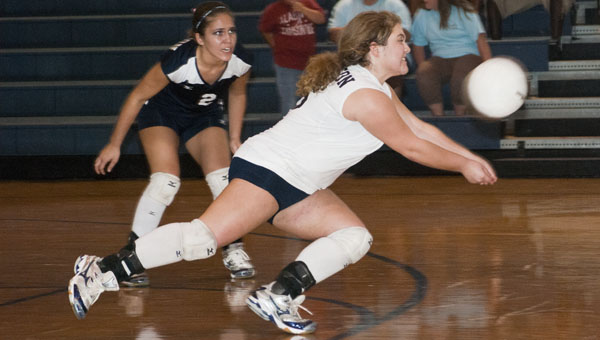 Panther pride: Jemison defensive specialist Morgan Posey, above, leaves her fee to return a serve against Calera on Tuesday while teammate Tanya Liveoak looks on.

The Panthers (28-11) on Tuesday hosted and won the Class 4A, Area 6 tournament, earning the right to host one of four 4A regional tournaments across the state on Saturday.

“We had some letdowns, but Calera is a good team—they’re well-coached,” Jemison coach Leighsa Robinson said. “We were more consistent than we’ve been, and that’s going to be big going into Saturday.”

Wells and Kortney Robinson were named to the all-tournament team from Jemison.

Boys: Javae Swindle, Jemison football •Rushed for 302 yards and four touchdowns on 19 carries in a 54-21 win over... read more