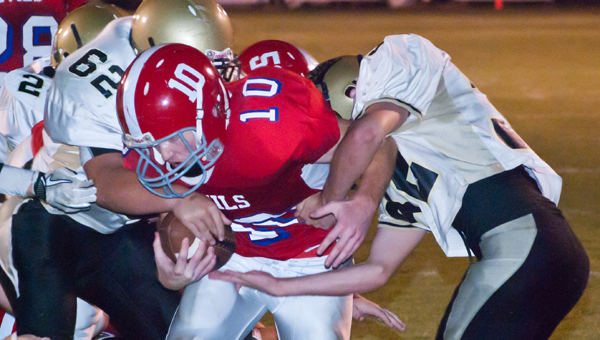 Running for the goal: Verbena sophomore Phillip Hensley (10), who started at quarterback for the first time this season, runs for a touchdown during the second quarter of Friday night’s win over Fayetteville.

VERBENA – Riding the performance of a sophomore making his first varsity start at quarterback, Verbena on Friday earned its first win of the season, 30-7 over visiting Fayetteville.

Senior Kelly Dorsett accounted for much of the damage, amassing 150 yards on 18 carries. Dustin Short, a fellow senior, had 127 yards on 27 carries. 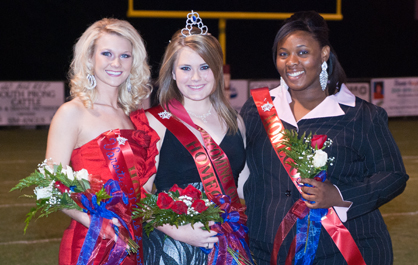 Sophomore Phillip Hensley, making his first start at quarterback this season because of an injury to junior Christian Coston in last week’s loss to Isabella, rushed for 39 yards on eight carries and also proved to be a threat throwing the football, completing five passes in seven attempts for 36 yards and two 2-point conversions.

“Tuesday was his first day behind center,” Verbena coach Mike Harris said. “He didn’t do anything to hurt us tonight—he threw the ball well and he ran it well.”

Fayetteville scored first, on a 37-yard pass play, but the hosts answered with a 60-yard drive that ended with a 4-yard run by Dorsett. A 2-point conversion attempt failed.

Hensley scored on a QB sneak less than 2 minutes into the second quarter. This time, Hensley rolled right and found junior Marquez Deramus for two points.

The Devils scored again before halftime, on a 28-yard reverse pass from Dorsett to sophomore Jacob Montgomery.

Hensley concluded the scoring with a 3-yard touchdown run up the middle with 7:02 left in the game and then added two more points on a pass to junior Jeremy Creger.

Ashley Shiers was crowned Homecoming queen before the game.

Even under normal circumstances, it is difficult to get a large group of teenage boys to focus on a common... read more