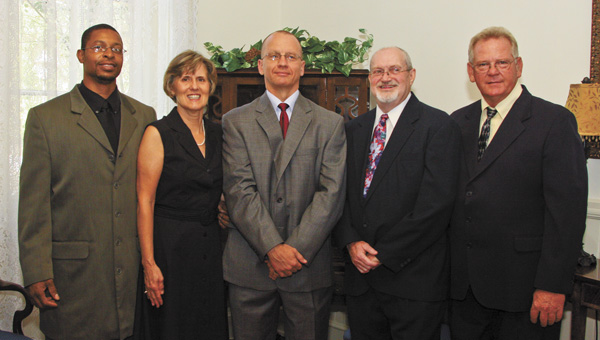 Ray Dennis (far right) stands in the place of his late brother, Dale Dennis, who was posthumously inducted into the Alabama School for the Deaf Hall of Fame. Alongside him are other inductees, Nathaniel Riley, Kay Hill Gurley, Bill Estes representing his mother Peggy Croker Estes, and Tommy Daugherty.

A Clanton native was inducted posthumously into the Alabama School for the Deaf Hall of Fame this month.

Dale Dennis, who attended ASD from the early ’70s until graduating in 1979, was touted as one of the greatest offensive and defensive tackles in the school’s history and received many honors in his time there.

Unfortunately, Dale could not attend the ceremony due to his untimely death in an automobile accident at the age of 34. Standing in his place was his older brother, Ray.

“He loved kids. He liked to play with kids, and he loved sports,” Ray Dennis said of his late brother.

“Dale had so many friends,” added Ray’s wife, Betty. “He had a lot of friends, deaf and non-deaf. He was like a son to us.” 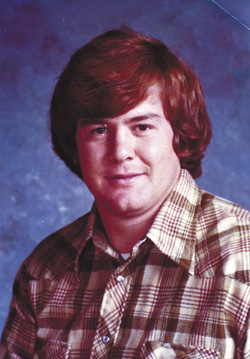 It doesn’t take long to figure out that the Dennises are a close-knit family. Perhaps one reason for that is because they have shared the same struggles. Dale was born deaf, as were two of his sisters and one brother (Ray). There were nine siblings in all.

Ray has always been able to hear with the help of hearing aids. He also learned to read lips, as did Dale.

It can be easy to equate certain disabilities with limitations, but in Dale’s case, he kept proving people wrong.

Dale’s football honors include Deaf All-American, Talladega County All-County, and State of Alabama Class A All-State First Team as an offensive tackle. He was also named to the Deaf All-American and Mason Dixon All Tournament teams in basketball.

At ASD, Dale was known as a very outgoing person and was described as being “a very huge guy for his age.” On the football field he was known for his many pancake blocks and bone-crushing tackles, while on the court he was a strong rebounder.

On Sept. 18, Dale was inducted at the 16th Hall of Fame ceremonies alongside four other alumni and a former coach. These included Tommy Daugherty of Mount Olive; Peggy Crocker Estes, a native of Lawley; Nathaniel Riley of Valley, Jimmy Earl Tidwell of Tarrant and Kay Hill Gurley of Talladega.

“It made Ray very proud that they gave him this opportunity,” Betty said.

An unfortunate incident at a Lowndes County high school on Tuesday has cast doubt on the remaining football schedule, which... read more