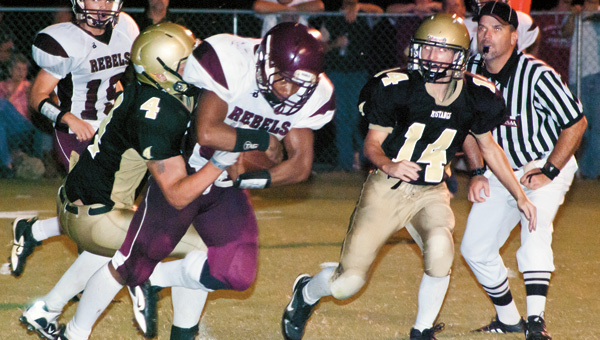 ISABELLA – Though it didn’t quite live up to last year’s double overtime thriller, Isabella-Thorsby did have some last minute excitement.

Isabella was unable to convert an onside kick in the game’s final two minutes, securing Thorsby a 21-14 win.

Thorsby now improves to 3-0 first the first time since 1989.

Thorsby scored first off a long run from midfield by Marcus Bray. Eduardo Rico hit his first of three PATs to put the Rebels up 7-0 with 3:31 to go in the first quarter.

The visitors next scored on a 12-yard run by Kalup Nunn.

Mustang quarterback Austin Haigler scored from 35 yards out to put Isabella on the scoreboard, 14-6. Thorsby was able to score one more touchdown before the half—on a 1-yard run by quarterback Andrew Farris—which proved to be the difference.

With 120 seconds left to go in the game, Haigler scored on a 3-yard run. A successful PAT tightened the score 21-14, but the unsuccessful onside kick attempt ended Isabella’s hope for a late comeback.

Thorsby’s volleyball team played the minimum number of sets on Thursday in defeating both Fayetteville (25-20, 25-19) and Vincent (25-7,... read more