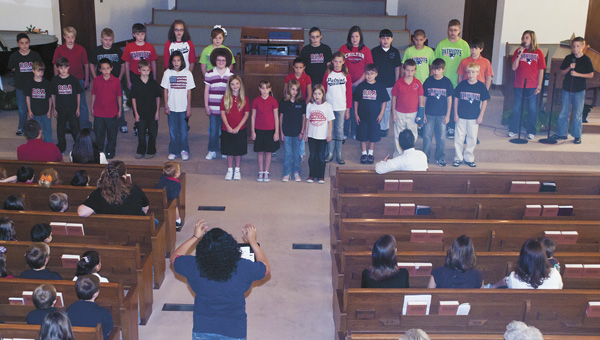 JEMISON — The students of Chilton Christian Academy, their families and faculty members observed Patriot Day on Friday to remember the lives lost in the Sept. 11, 2001, terrorist attacks.

A video told the story of a man who lived through the tragedy and found a renewed faith in God.

Following the video, Principal Charles Gottshall shared some facts about 9/11, how people responded to the tragedy and how it affects us nine years later.

“Life is more than things or money. Life is about loving your family and loving your Savior,” he said. “When tragedy strikes, do not blame God by asking ‘Why,’ but ask ‘What.’ ‘God, what are you trying to teach me and what are you attempting to accomplish in my life?’”

The death toll from 9/11 was estimated to be 2,996. These included 19 terrorists, 246 passengers on the four airliners, 2,606 workers at the World Trade Center Towers, and 125 workers at the Pentagon.

Also, 411 emergency workers were called to the various scenes to rescue survivors and treat the injured.

In September 2002, President George W. Bush proclaimed Sept. 11 as Patriot Day. The official proclamation was read as part of the service Friday. The service was held a day early because Sept. 11 falls on a Saturday this year.

The CCA fourth through sixth grade choir sang, “Blessed is the Nation” and recited the American Creed.

To close the service, the assembly paused for a moment of silence.

The world will be watching Maplesville on Friday, as the school’s distance learning classroom will be featured on CNN as... read more