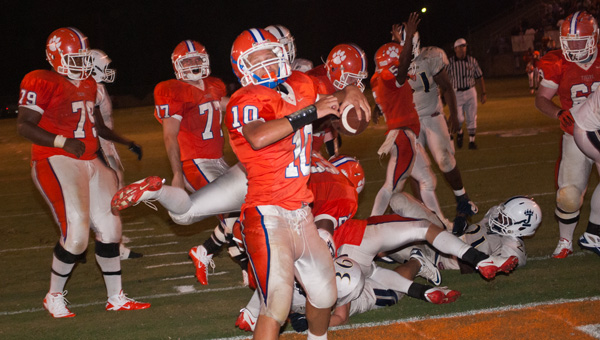 In the zone: Chilton County quarterback Cameron Cummings celebrates a touchdown run against Jemison on Thursday.

Jacob McKinney’s interception in his end zone saved a 27-26 win for Chilton County on Thursday over football rival Jemison.

The visiting Panthers fought back from a 20-8 third quarter deficit and were a two-point conversion away from taking the lead with 22 seconds remaining in the game when McKinney, expecting a playaction pass, jumped in front of a slant route.

“We talk about playing the next play no matter what happened the play before,” said CCHS coach Brian Carter, who improved to 2-1 in the rivalry. “We made the last play.”

Most in attendance—and there were a lot of them for the season opening clash—probably would have thought that deciding play would have gone in Jemison’s favor because the visitors had all the momentum.

A four-yard run by senior J.J. Agee and a point-after by Zach Headley about 3 minutes into the second half gave CCHS a 20-8 lead, which seemed insurmountable because Jemison had only mustered one first down on eight plays from scrimmage.

But the Panthers clawed back into the game thanks to deep passes by senior quarterback Scott Clements and long runs by junior running back Javae Swindle.

CCHS sophomore quarterback Cameron Cummings answered with a three-yard run and Headley added the extra point to make it 27-14, but with 8:15 left in the game, Clements faked a handoff right, rolled left and found Eddie Hubbard down the visitors sideline. Hubbard caught the ball over his shoulder and outran the defense, but the two-point conversion failed to leave the score at 27-20 CCHS.

The Jemison defense held Chilton to a three-and-out on the next possession, and the Jemison offense marched 69 yards for the last score of the game, a three-yard run by Swindle.

“It’s incredible; there’s nothing like it,” the senior said about earning a win over a rival in his last season.

Swindle finished with 157 yards on 13 carries, but 124 of those yards came on only two carries, one of which was a 65-yard touchdown run on the game’s first play from scrimmage.
But the story of the first half was the CCHS running attack. With a quarterback, Cummings, who had never before thrown a pass in varsity action, the Tigers stayed on the ground to build their lead.

Senior Dylan Jackson (nine tackles and an interception) and Richard Hilliard (eight tackles and a fumble recovery) were the standouts on the CCHS defense.

Most Isabella football fans know that Friday will mark the official beginning of coach Scott Booth’s second stint at the... read more