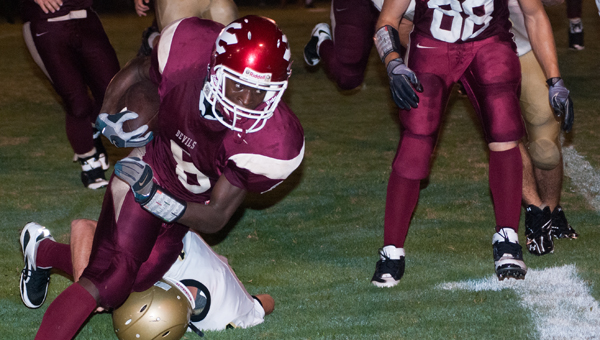 MAPLESVILLE – Maplesville on Friday demonstrated why it should be one of the top teams in Class 1A this season, defeating Isabella, 33-2, in a preseason game.

The Red Devils struck time and again on long gains. Isabella, meanwhile, could never put together a sustained drive—especially after HIS starting quarterback Austin Haigler went out of the game on the visitors’ first series and never returned.

On its first possession, Maplesville capped off a long drive with a two-yard run by sophomore Brintain Hill.

Hill recovered a fumble on the ensuing Isabella possession, and then quarterback Matt Hamner hit senior receiver James Madsen in the front right corner of the end zone for another score.

Hill scored from four yards out on Maplesville’s next possession, but the point after was missed after Casey Atchison was good on his first two tries.

Following an Isabella punt, senior running back Hunter McCay took a handoff on Maplesville’s first snap of the possession and wove his way 60 yards through the defense to give the Devils a 27 lead, following the extra point, with 7:24 left in the second quarter.

The hosts showed off their depth at quarterback—behind the senior Hamner—even before the first half ended, when sophomore Anthony Johnson passed the ball across the middle to freshman Damian Mitchell, who ran the remainder of the 57 yards into the end zone with 5:27 left before intermission.

Isabella got on the scoreboard in the third quarter. With Maplesville backed up near its own goal line, a fumbled snap resulted in a safety.

Maplesville visits Vincent on Aug. 27 in its first regular season game. Isabella will host Central-Coosa on the same day. Both games will begin at 7 p.m.